Support from application developers continues to expand, with growing family of dual-screen-compatible apps available at launch 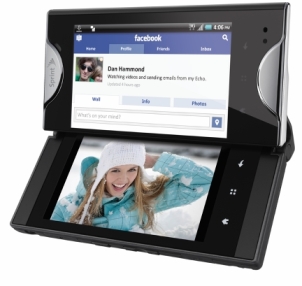 Featuring two high-resolution 3.5-inch WVGA touchscreen displays connected by a durable, patent-pending Super Copper Alloy "pivot hinge," Kyocera Echo allows users to use both displays independently, side-by-side or combined to form a tablet-like experience with 800 x 960 pixels in a 4.7-inch (diagonal) display. The device also folds up easily into a pocket-friendly single-screen configuration. A complete look at Echo's unique features and functionality is available at www.echobykyocera.com or www.sprint.com/echo.

"We're a multitasking society, always looking for more information and easier ways to do things in our mobile lifestyles," said Yasuhiro Ohishi, president at Kyocera Communications Inc. "We've heard tremendous feedback from people who've had the chance to experience the device, something we highly encourage consumers to do at any Sprint store. Because it's so unique and a new experience for Android users, it's helpful to experience it firsthand.

"The mobile and computer worlds often build on each other - we looked to ways in which consumers use their computers when developing Kyocera Echo since smartphones are essentially used as mini PCs every day. Drawing from these cues, Echo brings a new level of functionality to the Android smartphone."

The Reviews Are In…
With an 8 out of 10 rating for Echo, Engadget commended Kyocera for its execution: "What the Echo delivers is an entirely new approach to Android, and … Kyocera has managed to add a second screen to the experience without flubbing the execution. The screens themselves were sharp…thanks to Tablet Mode Extension app, even everyday titles like TweetDeck and Facebook were given new life."

"In a world filled with interchangeable Android phones, the Kyocera Echo truly stands out," touts LAPTOP Magazine, which rated the device 4 out of 5 stars and tweeted "Kyocera Echo lives up to the hype."

Kyocera Android Developer Program Expands
The Kyocera Android Developer Program, supporting development of dual-screen-compatible apps for Echo, continues to expand. Users can go to www.echobykyocera.com and find direct links to many of the growing universe of compatible apps.+ Several developers are planning to offer special promotions for their compatible applications, which will be featured on the site and highlighted at www.facebook.com/kyoceramobilephones.

Operating on the Android 2.2 operating system, Kyocera Echo gives users access to more than 150,000 apps in Android Market™. The device utilizes Sprint's nationwide 3G network and Wi-Fi (802.11 b/g); is Wi-Fi hotspot capable, supporting up to five devices; features a 5 megapixel camera with flash, autofocus and digital zoom plus 720 HD camcorder; supports corporate (Exchange ActiveSync®) and personal (POP & IMAP) email, IM (Google Talk™), and text messaging; and has 1 GB of onboard memory with an 8GB microSD™ card for the external memory card slot, which supports cards up to 32GB. A complete look at Echo's unique features and functionality is available at www.echobykyocera.com.

About Kyocera Communications, Inc.
Kyocera Communications Inc. (KCI) is the headquarters for Kyocera- and Sanyo-branded wireless products and accessories in the Americas. The company's devices are driving the convergence of telecommunications, broadband and multimedia. KCI was formed in April 2009 through the combination of Kyocera Wireless Corp. and Kyocera Sanyo Telecommunications Inc., two wholly owned subsidiaries of Kyocera International Inc. The former was created when Kyocera purchased QUALCOMM Incorporated's consumer wireless phone business in 2000, while the latter was formed when Kyocera purchased the wireless phone business of Sanyo Electric Co., Ltd. in 2008. Based in San Diego, KCI leverages Japan's history of creating advanced consumer technologies around humanism and respect for the environment and blending them with a Western entrepreneurialism and style, resulting in a unique design language and a natural, user-friendly interface. For more information, please visit www.kyocera-wireless.com or follow on Facebook at www.facebook.com/kyoceramobilephones.

Kyocera Corporation (NYSE:KYO) (TOKYO:6971) (http://global.kyocera.com/), the parent and global headquarters of the Kyocera Group, was founded in 1959 as a producer of fine ceramics (also known as "advanced ceramics"). By combining these engineered materials with metals and plastics, and integrating them with other technologies, Kyocera has become a leading supplier of telecommunications equipment, office-document imaging equipment, solar power generating systems, semiconductor packages, electronic components, cutting tools and industrial ceramics. During the year ended March 31, 2009, the company's net sales totaled 1.07 trillion yen (approximately US$11.5 billion). Kyocera marked its 50th anniversary in 2009, and the 40th anniversary of its U.S. operations. It is ranked #554 on Forbes magazine's 2010 "Global 2000" listing of the world's largest publicly traded companies.

©2011 Kyocera. All rights reserved. Kyocera and Echo are registered trademarks of Kyocera Corporation. Android and Android Market are trademarks of Google Inc.; use of these trademarks is subject to Google Permissions. microSD is a trademark of SanDisk Corporation. All other marks are properties of their respective owners.