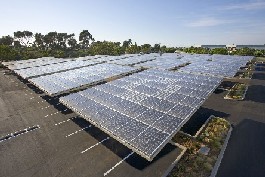 SAN DIEGO--June 23, 2005--Kyocera today announced that it will hold a public dedication for its first-ever Solar Grove(TM) -- an array of 25 solar tree(TM) that converts a 186-vehicle parking lot into a 235-kilowatt solar electric generating system -- on Friday, June 24, 2005 at its North American headquarters and Kearny Mesa plant, located at 8611 Balboa Avenue in San Diego.

The Solar Grove will serve as a symbol of Kyocera's goal to make the San Diego/Tijuana region an important hub in North America's solar energy industry. Its unique concept models the life process of natural trees by converting sunlight into energy without adding carbon dioxide or other greenhouse gases to the atmosphere -- while providing structures that are both shade-producing and aesthetically pleasing.

The system's 25 solar trees form a carport in an employee parking lot, utilizing a total of 1,400 Kyocera KC-187G solar photovoltaic (PV) modules and 200 custom-manufactured, light-filtering PV modules. The system's capacity of 235 kilowatts(1) -- capable of generating 421,000 kilowatt hours per year -- will be equivalent to the electrical needs of 68 typical San Diego homes(2). According to the U.S. Environmental Protection Agency's Power Profiler, generating this amount of electricity through conventional fossil fuel resources would annually release 338,905 pounds of carbon dioxide, a suspected contributor to global warming; 421 pounds of nitrous oxide, which has been linked to the destruction of the Earth's ozone layer; and 253 pounds of sulfur dioxide, the principal contributor to acid rain.

The economic viability of this project is supported by the California Public Utilities Commission's "Self Generation Incentive Program," which will cover approximately 36% of the system's purchase and installation costs; as well as federal and state tax credits, and a five-year accelerated depreciation schedule. The standard Kyocera solar modules used in the Solar Grove are covered by a 25-year manufacturer's warranty, and Kyocera anticipates that the Solar Grove will pay for itself within 12 years.

"The economic viability of PV systems and their positive impact on our environment represent a significant opportunity for businesses throughout California," said Steve Hill, president of Kyocera Solar, Inc. "By installing this very attractive system on a Kyocera facility, we are setting a new benchmark for commercial PV installations, and leading San Diego into the solar age."

From the distinctive architectural design to the surrounding landscaping, the Solar Grove is meant to exemplify Kyocera's commitment to promoting harmony between our planet and all living things. With this in mind, Kyocera commissioned the architecture firm of Tucker Sadler to design the Solar Grove, under the direction of its CEO and Principal, Robert Noble. "We chose an architectural firm with an environmental philosophy similar to that of Kyocera," stated Arthur Nishioka, Planning and Development Group manager at Kyocera International, Inc. "Tucker Sadler has demonstrated an abiding interest in preserving the environment by designing buildings that emphasize sustainability through efficient energy consumption, conservation and recycling."

For 30 years, Kyocera has been pushing the forefront of environmental preservation and promoting sustainable growth by providing solar energy to the world. Kyocera Solar, Inc. is a world-leading supplier of environmentally sound, solar electric energy solutions. With operating headquarters in Scottsdale, Ariz. and regional sales centers in Brazil and Australia, Kyocera Solar, Inc. serves thousands of customers in both developed and developing regions. The company is a wholly-owned subsidiary of Kyocera International, Inc. of San Diego, the North American headquarters and holding company for Kyoto, Japan-based Kyocera Corporation.

Kyocera Corporation  (NYSE: KYO), the parent and global headquarters of the Kyocera Group, was founded in 1959 as a producer of advanced ceramics. By combining these engineered materials with metals and plastics, and integrating them with other technologies, Kyocera Corporation has become a leading supplier of solar energy systems, telecommunications equipment, semiconductor packages, electronic components, laser printers, copiers and industrial ceramics. During the year ended March 31, 2005, the company's net sales totaled 1.18 trillion yen (approximately $11 billion).