Since 1975, Kyocera Corporation (President: Tetsuo Kuba) has continuously been developing its solar energy business with the business rationale, “To bring the power of the sun to the world.” To achieve that goal, in August 1984, Kyocera established the Sakura Solar Energy Center just outside of Tokyo for the research & development, and promotion of solar power generating systems. This month the Center marks its 25th anniversary. 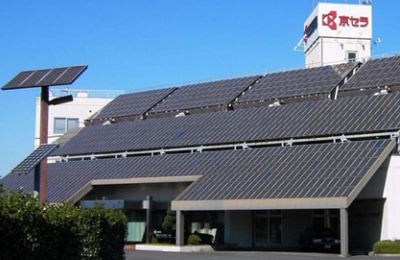 At the time of the establishment of the Sakura Solar Energy Center in 1984, use of solar power generating systems was limited to special applications such as unmanned lighthouses, satellites and wireless repeater stations; and not many people were aware of the possibility of solar power as an energy source used in daily life. The concept behind the establishment of the Center was to create a comprehensive facility at which to conduct research into solar power products and to facilitate understanding of the benefits of solar energy by introducing it to the world.

Serving our mission, “To deliver light to areas without electricity,”set-up within the facility are solar power generating systems for real-life examples of housing, agricultural pumps, and village electrification that are typically found in areas without electricity in developing countries in Africa and Asia. Kyocera has focused particular attention on experiments and R&D with these installations.

The Center is conveniently located close to Narita International Airport — the gateway to Japan — in Sakura City, Chiba Prefecture, and has been receiving various groups from state visitors and important guests to technical staff and engineers from all over the world for training on solar power applications. In the 25 years since it was established over 50 thousand visitors have come to the Center to learn about solar power technology — contributing to increased global solar energy awareness.

The technology and experience cultivated at the Center is presently being put to work around the world in mainstream grid-connected systems. With the rise in concern for global environmental issues solar energy first started drawing wide-spread attention as a clean energy source in the 1990s. Anticipating this trend, in 1991, Kyocera was the first company to provide commercial grid-connected systems in Japan.

As part of the company’s corporate social responsibility activities, Kyocera has been actively donating solar power generating systems since 1983 to locations around the world that do not have electricity; starting with a system to the village of Kankoi, Pakistan, as well as a rural village electrification system in Gansu Province, China, and a solar-powered agricultural pump in Thailand. In recent years, Kyocera has also made donations of solar power generating systems for school facilities in Tanzania, Nepal and Uganda in order to help contribute to the education of the children who will be the bearers of the future.

Moreover, the solar modules developed at the Center are being installed all over the world, including developing countries in Asia and Africa, as part of the Japanese government’s Official Development Assistance (ODA) program. This started in 1984 with the first project to supply a solar power installation in Pakistan, and since then has also expanded to other countries including Myanmar, Vietnam, Mongolia, Malawi and Uganda. In 2007, the first Yen-Loan Project to use solar power generating systems was confirmed to provide Kyocera solar modules in Tunisia.