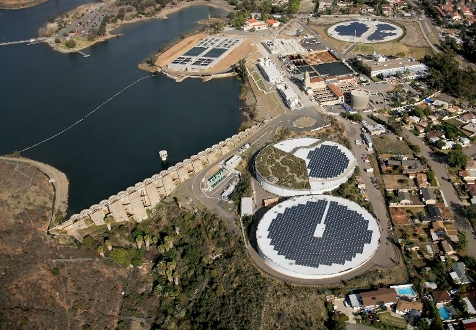 SCOTTSDALE, Ariz. – October 22, 2009 -- If you’re considering investing in a large-scale solar electric generating system, but need assurance about the economics or reliability of solar power, please read on.

“The 6,128 Kyocera solar modules at the Alvarado Water Treatment Facility have performed at 115 percent of expected output since their installation,” said John Helminski, Emerging and Renewable Technology Program Manager for the City of San Diego. “Initially, we anticipated 1.6 million kilowatt hours (kWh) annually – but it’s been producing just over 1.85 million.”

The Alvarado facility will increase its water treatment capacity by 67 percent next year, from 120 million gallons per day to 200 million. To alleviate the cost of the expansion, the City of San Diego became one of the first in the nation to adopt a Power Purchase Agreement. Also known as a “PPA,” this contract between an electricity producer and a host site owner helps curb energy costs in a sustainable manner.

The PPA allows the Alvarado Water Treatment Plant to host ― without owning ― the Kyocera solar modules. The facility’s PPA partner owns, operates and maintains the entire system. For a period of 20 years, the City of San Diego has agreed to purchase every kilowatt hour that the system produces, at a fixed price, with an annual cost escalation of just one percent. That’s much lower than the expected annual increase in utility rates.

“Under our PPA, solar electricity is already costing us less per kilowatt hour than utility power,” Helminski explained. “Additionally, utility rates typically rise by at least 2.5 percent each year, which promises further savings.”  Taking a conservative approach and compounding the difference between 2.5 percent and 1 percent annual rate increases, the City estimates savings of about $325,000 during the course of its 20-year PPA. If rates rise an average of 4 percent per year, the savings will be about $650,000.

The system’s environmental benefits are equally impressive. The solar installation occupies previously unused space atop the concrete roofs of three water storage reservoirs. Its annual power output represents the energy equivalent of about 2,640 barrels of oil. That’s enough to offset about 580 metric tons of carbon dioxide each year — an impact comparable to about 400 acres of green forest.

“From our perspective, the system has performed flawlessly and beyond our expectations,” Helminski continued. “It’s the City of San Diego’s goal to be both environmentally sensitive and to ensure that our projects make economic sense. This installation helps us to achieve both goals.”

The project reflects a major initiative to increase California’s renewable energy mix to 33 percent by 2020. Consequently, the Alvarado Water Treatment Plant is attracting interest from other municipalities considering solar power. “I’m out there once or twice a month giving a tour,” Helminski stated.

The City of San Diego, already a solar energy leader, is now pursuing PPAs for its other water treatment facilities.  “We’re extremely proud that San Diego leads California in both the number of solar energy installations as well as in the amount of electricity generated using photovoltaic panels,” said San Diego Mayor Jerry Sanders. “Solar panels on the Alvarado Water Treatment Plant are a major step toward meeting our goal of 50 megawatts of solar power within city limits by 2013.”

According to Ian Knox, Kyocera’s Southern California sales manager, large-scale solar electric generating systems are becoming commonplace in many regions of the globe. “Kyocera solar panels are ideal for municipalities and water treatment facilities because of their high efficiency and quality construction,” Knox stated. “Kyocera is committed to environmental preservation and providing quality solar energy solutions to the world.”

About Kyocera
Kyocera Solar, Inc. (http://www.kyocerasolar.com) is a world-leading supplier of environmentally sound, solar electric energy solutions. With operating headquarters in Scottsdale, Ariz. and regional sales centers in the U.S., Brazil and Australia, Kyocera Solar, Inc. serves thousands of customers in both developed and developing regions. The company is a wholly-owned subsidiary of Kyocera International, Inc. of San Diego, the North American headquarters and holding company for Kyoto, Japan-based Kyocera Corporation.

Kyocera Corporation (NYSE:KYO) (TOKYO:6971) (http://global.kyocera.com/), the parent and global headquarters of the Kyocera Group, was founded in 1959 as a producer of fine ceramics (also known as “advanced ceramics”). By combining these engineered materials with metals and plastics, and integrating them with other technologies, Kyocera Corporation has become a leading supplier of solar electric generating systems, telecommunications equipment, copiers, printers, electronic components, semiconductor packages, cutting tools and industrial ceramics. During the year ended March 31, 2009, the company’s net sales totaled 1.13 trillion yen (approximately US$11.5 billion). Kyocera marks its 50th anniversary in 2009, and the 40th anniversary of its U.S. operations. It is ranked #418 on Forbes magazine’s 2009 “Global 2000” listing of the world’s largest publicly traded companies.