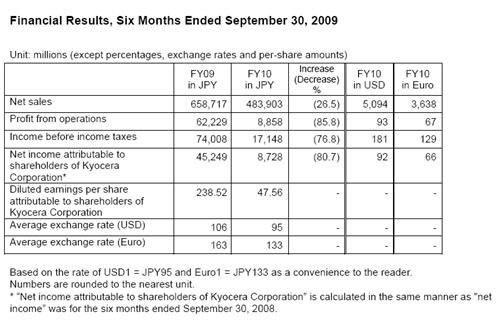 During the six months ended September 30, 2009 (the "first half"), the global economy showed signs of recovery as industrial output expanded, driven by economic stimulus packages and financial countermeasures in many nations. Demand for components used in digital consumer equipment increased in comparison with the prior six months, but remained below the first half of the previous fiscal year. Amid the continuation of this economic environment, consolidated net sales in the first half amounted to JPY483,903 (USD5,094; Euro3,638) million, a decrease of 26.5% compared with the same period of the previous fiscal year.

Demand for components fell as compared with the previous first half; sales of mobile phone handsets remained low in Japan and the U.S.; and sales of information equipment decreased, due primarily to curtailed information technology investment. In addition, the company’s revenue and profit were reduced by the appreciation of the yen against the Euro and U.S. dollar.

The "Others" segment includes various businesses such as information and communications technology services and materials for electronic components. Sales in this reporting segment decreased by 12.8%, to JPY57,825 (USD609; Euro435) million. Operating profit decreased by 87.0%, to JPY1,798 (USD19; Euro14) million, due to a decline in sales and the absence of a gain on the sale of fixed assets recorded in the previous first half in the amount of approximately JPY10.6 billion (USD112; Euro80 million).

These improvements were concentrated in the second quarter, in which consolidated net sales increased by 14.7% compared to the first quarter, driven by increased demand for components used in digital consumer equipment, as well as the introduction of new mobile phones, printers and multifunctional document imaging equipment. This increase in net sales, combined with thorough cost-cutting and productivity improvement, succeeded in moving profit from operations back into the black, and significantly improved income before income taxes.

First-half business conditions were mixed. The solar energy business outside of Japan continued to face tougher pricing conditions than expected, while digital consumer equipment production levels recovered beyond initial projections, and demand for components primarily in the Semiconductor Parts Group expanded steadily. However, for the three months ending December 31, 2009 (the "third quarter") and onward, demand for components used in digital consumer equipment remains unclear outside of Japan. Therefore, Kyocera has made no revision to its sales and profit forecast for the year ending March 31, 2010 ("fiscal 2010") that was announced in April 2009.

Though business conditions will remain uncertain during the second half, especially regarding the global economy and exchange rates, Kyocera will vigorously strive to secure orders for products where demand is forecast to grow. Additionally, Kyocera will pursue increased profitability by further cutting costs and improving productivity, as a means to achieve its full-year financial forecasts. 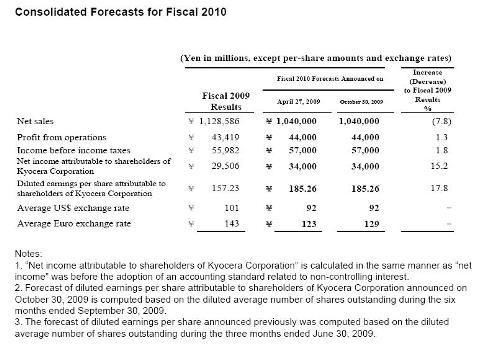 Except for historical information contained herein, the matters set forth in this press release are forward-looking statements that involve risks and uncertainties including, but not limited to, product demand, competition, regulatory approvals, the effect of economic conditions and technological difficulties, and other risks detailed in the Company's filings with the U.S. Securities and Exchange Commission.

Complete details of Kyocera’s financial results for the six months ended September 30, 2009 are available at: http://global.kyocera.com/ir/financial/f_results.html

Kyocera Corporation (NYSE:KYO)(TOKYO:6971) (http://global.kyocera.com), the parent and global headquarters of the Kyocera Group, was founded in 1959 as a producer of fine ceramics (also known as "advanced ceramics"). By combining these engineered materials with metals and plastics, and integrating them with other technologies, Kyocera has become a leading supplier of solar power generating systems, telecommunications equipment, electronic components, laser printers, copiers, semiconductor packages, cutting tools and industrial ceramics. During the year ended March 31, 2009, the company’s net sales totaled JPY1.13 trillion (approximately USD11.5 billion). The company, which marks its 50th anniversary and the 40th anniversary of its U.S. operations this year, is ranked #418 on Forbes magazine’s 2009 "Global 2000" listing of the world’s largest publicly traded companies.