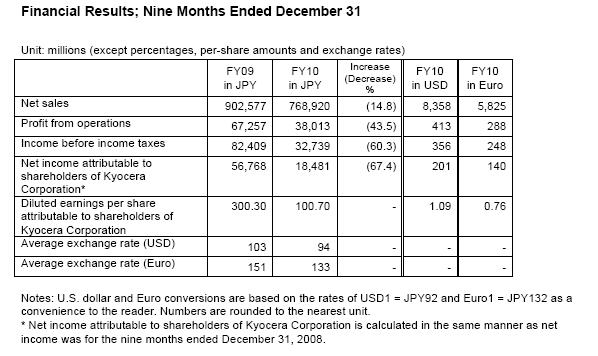 Exchange rates averaged JPY94 to the U.S. dollar and JPY133 to the Euro, marking appreciation of JPY9 (approximately 9%) and JPY18 (approximately 12%), respectively. As a result, net sales and income before income taxes (after full translation into yen) were, for calculation purposes, reduced by approximately JPY48,500 (USD527) million and JPY13,500 (USD147) million, respectively.

Demand for components showed a steady recovery trend over the nine-month period — led by rising production of digital consumer electronics beginning in the first quarter, and coupled by a third-quarter turnaround to production increases in the semiconductor and automotive industries. In addition, demand for solar energy products remained solid during this nine-month period, and is showing an upward trend, particularly in Japan.

During these nine months, Kyocera was able to achieve an improvement in profitability disproportionate to the recovery in sales as a result of comprehensive efforts to reduce costs and improve productivity during the first three quarters. In the fourth quarter, Kyocera will strive for growth despite uncertainty in the global economy, fluctuating exchange rates and other factors, by capitalizing on its aggregate power in markets relating to information and communication technology, environmental preservation technologies, and renewable energy products.

In light of the results for these nine months and the outlook for the fourth quarter, Kyocera has made the following upward revisions to the consolidated financial forecasts announced in October 2009 for the year ending March 31, 2010. 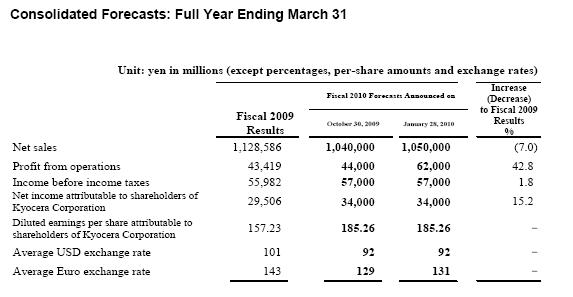 1. Net income attributable to shareholders of Kyocera Corporation is calculated in the same manner as net income was for the year ended March 31, 2009..

2. Forecast of diluted earnings per share attributable to shareholders of Kyocera Corporation announced on January 28, 2010 is computed based on the diluted average number of shares outstanding during the nine months ended December 31, 2009.

3. The forecast of diluted earnings per share attributable to shareholders of Kyocera Corporation announced previously was computed based on the diluted average number of shares outstanding during the six months ended September 30, 2009.

4. On September 24, 2009, WILLCOM, Inc., applied for Alternative Dispute Resolution (ADR), and received acceptance for the ADR procedure. At December 31, 2009, WILLCOM’s business revitalization plan continues to be under discussion and has not been resolved. The result of the resolution may affect the valuation of Kyocera’s trade receivables from WILLCOM, Inc. and may have a material effect on Kyocera’s consolidated results of operations and financial position, which has not yet been reflected in the consolidated financial forecast set forth above. At December 31, 2009, Kyocera’s trade receivables from WILLCOM, Inc. were JPY15,350 (USD167) million.

Except for historical information contained herein, the matters set forth in this press release are forward-looking statements that involve risks and uncertainties including, but not limited to, product demand, competition, regulatory approvals, the effect of economic conditions and technological difficulties, and other risks detailed in the Company's filings with the U.S. Securities and Exchange Commission.

Complete details of Kyocera’s financial results for the nine months ended December 31, 2009 are available at: http://global.kyocera.com/ir/financial/f_results.html

Kyocera Corporation (NYSE:KYO)(TOKYO:6971)(http://global.kyocera.com), the parent and global headquarters of the Kyocera Group, was founded in 1959 as a producer of fine ceramics (also known as "advanced ceramics"). By combining these engineered materials with metals and plastics, and integrating them with other technologies, Kyocera has become a leading supplier of solar power generating systems, telecommunications equipment, electronic components, laser printers, copiers, semiconductor packages, cutting tools and industrial ceramics. During the year ended March 31, 2009, the company’s net sales totaled JPY1.13 trillion (approximately USD11.5 billion). The company, which marked its 50th anniversary and the 40th anniversary of its U.S. operations in 2009, was ranked #418 on Forbes magazine’s 2009 "Global 2000" listing of the world’s largest publicly traded corporations.