KYOTO, July 20, 2010 — Kyocera Corporation (NYSE:KYO)(TOKYO:6971) today announced that it will boost annual shipments of its popular ceramic knives to two million units per year by FY2014* — an increase of 120% over last fiscal 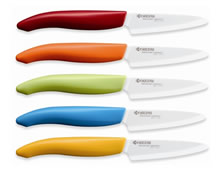 Kyocera knives and kitchen utensils are made using the company’s fine ceramics, resulting in lightweight blades that stay sharp for long periods, never corrode, and can even be bleached for thorough cleaning. These unique characteristics have contributed to the growing popularity of Kyocera’s ceramic knives since their introduction in 1984.

After more than a quarter of a century of sales, total shipments of Kyocera’s ceramic knives exceeded 6 million units in December of 2009, and are currently sold in more than 35 nations.

In recent years, demand for the company’s ceramic knives has rapidly grown. The trend of consumers demanding higher quality kitchen products, an increase in kitchen products being purchased as gifts, and the 2006 introduction of Kyocera’s Color Series have all contributed to the increased popularity and sales.

Kyocera’s retail distribution network has also steadily increased to about 8,000 stores worldwide. U.S retailers such as Williams-Sonoma, Sur la Table and Amazon.com offer Kyocera’s knives, along with Harrods in the U.K., El Corte Inglés in Spain and Galeries Lafayette in France.

Presently, the company’s knives remain highly popular in Japan, where about 70% of the company’s total are sold. However, Kyocera will aim to aggressively expand sales in the important U.S. and European markets and plans to increase sales outside of Japan to 50% of its total in the next few years.

Kyocera will continue to develop products that meet its customers’ various needs so more people worldwide can enjoy the ease-of-use, convenience and quality of ceramic knives.

Kyocera Corporation (NYSE:KYO)(TOKYO:6971)(http://global.kyocera.com/), the parent and global headquarters of the Kyocera Group, was founded in 1959 as a producer of fine ceramics (also known as “advanced ceramics”). By combining these engineered materials with metals and plastics, and integrating them with other technologies, Kyocera has become a leading supplier of ceramic kitchen utensils and applied ceramic products, solar power generating systems, telecommunications equipment, electronic components, printers, copiers, semiconductor packages, cutting tools and industrial ceramics. During the year ended March 31, 2010, the company’s net sales totaled 1.07 trillion yen (approximately USD11.5 billion). The company is ranked #554 on Forbes magazine’s 2010 “Global 2000” listing of the world’s largest publicly traded companies.