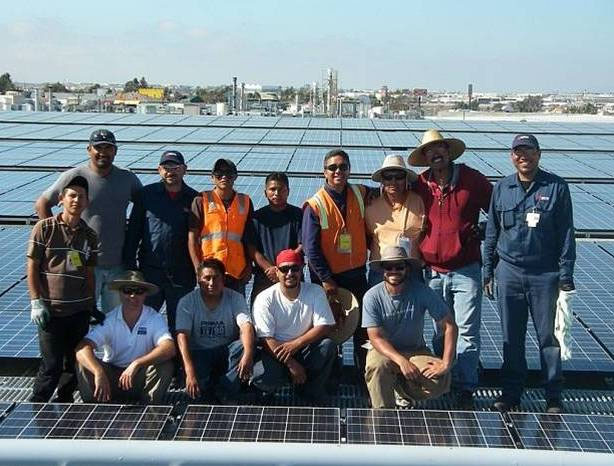 TIJUANA, MEXICO—December 21, 2010— Kyocera announced today that it has installed a 104-kilowatt grid-tied solar array atop its manufacturing facility in Tijuana, Mexico, using 512 of its KD205 and KC200 (watt) modules produced onsite.

The installation is part of a plan previously announced by Kyocera to promote the use of renewable solar energy within its global manufacturing facilities—bringing the total number of Kyocera locations worldwide using photovoltaic power to 21. The array will produce 115,000 kilowatt hours annually, providing approximately 1.8% of the solar manufacturing facility’s power usage. In terms of environmental impact, the installation will offset 77 tons of carbon dioxide per year, the equivalent of taking 71 cars off the road, or planting 1,948 trees.

The installation was a successful multinational effort that demonstrates Kyocera’s 35-year commitment to protecting our environment by utilizing the clean, renewable energy of the sun. An awareness of the project was one of the factors that recently led the Mexico Business Center of the San Diego Regional Chamber of Commerce to present Kyocera with its Environmental Stewardship Award.

Project Manager John Auvil of Kyocera Solar, Inc. shared the excitement employees felt in seeing the system go live. “This plant produces megawatts of solar power every month, but to be involved in this 100-kilowatt installation was truly a highlight of my career,” Auvil said. “It’s such a good feeling to help reduce the use of fossil fuels and to know that we’re creating electricity that flows from the virtually endless energy of the sun into our new solar array and then into the power grid.”

Kyocera Solar, Inc. (http://www.kyocerasolar.com) is a world-leading supplier of environmentally sound, solar electric energy solutions. With operating headquarters in Scottsdale, Ariz., and regional sales centers in the U.S., Brazil and Australia, Kyocera Solar, Inc. serves thousands of customers in both developed and developing regions. The company is a wholly-owned subsidiary of Kyocera International, Inc. of San Diego, the North American headquarters and holding company for Kyoto, Japan-based Kyocera Corporation.