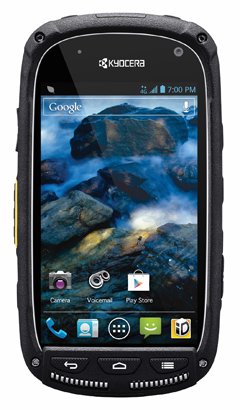 "Anyone will quickly appreciate the durability of this smartphone, whether you work in rugged environments or just enjoy outdoor activities," said David Owens, vice president-Product Development, Sprint. "It seems like everyone I talk to has damaged a phone by dropping it on a hard surface. This phone is for all those customers who want to make sure even if that happens, the phone will withstand the fall. This is an impressive Android device that can withstand extreme conditions while bringing our customers the speed of Sprint 4G LTE and convenience of instant push-to-talk communications from Sprint Direct Connect."

Torque is built to Military Standard 810G (MilSpec) to withstand dust, shock, vibration, solar radiation, humidity, blowing rain, low pressure, salt fog and extreme temperatures, along with IP67 standards for dust, sprayed water and full immersion up to one meter deep for up to 30 minutes. The device is specifically designed to hold up to the rigors of today's rough-and-tumble lifestyles - whether on a construction site, beach trip or a kids' playground - without sacrificing style and features.

"We know from our research, conversations with customers and personal experiences that there's a tremendous consumer need for rugged handsets to deal with life's everyday challenges," said Eric Anderson, senior vice president and general manager of global sales and marketing at Kyocera Communications. "Those devices, however, have traditionally been designed specifically for an enterprise customer. Kyocera has taken the most robust, rugged MilSpec features and combined them with our easy-to-use, affordable, Android smartphone designs to create a durable mobile device that supports not only the construction foreman using Sprint Direct Connect but also the outdoor sports enthusiast or the busy mom or dad who's juggling children and playground duties."

Water(park)-Proof, Dirt-Proof, Drop-Proof
Torque has been tested to hold up against life's extremes - including some most people will never experience - to help ensure it will be there when you need it, including:

Best of all, Torque combines the best ruggedized features from Kyocera's highly successful Dura Series of ruggedized devices with an Android 4.0 (Ice Cream Sandwich), LTE smartphone. Torque features include a 4-inch WVGA (800 x 480) LCD IPS capacitive touchscreen with ruggedized, impact-resistant glass for added protection from scratches and cracks, a long-lasting 2,500mAh Lithium Ion battery and Swype for rapid text entry. It has a snappy MSM8960 1.2GHz Qualcomm Snapdragon® dual-core processor, 4GB ROM/1GB RAM memory, and supports microSD memory card expansion up to 32GB. Take advantage of 4G LTE speeds and the speedy processor with unlimited data. Sprint is the only national carrier with Truly UnlimitedSM 4G LTE data, text and calling to any mobile with no metering, no throttling, and no overages while on the Sprint network.

Smart Sonic Receiver Technology
Torque is the first U.S. device to feature Kyocera's proprietary Smart Sonic Receiver technology, which eliminates the need for a traditional speaker in a handset, instead using vibrations to transmit sounds directly to the eardrum with unparalleled sound quality. Building on Kyocera's 53-year heritage in advanced ceramics, the new technology uses a Kyocera ceramic actuator to turn sounds into vibrations. It uses twin paths to transmit those sounds to the user: traditional sound waves and vibrations that are carried by body tissue directly to the eardrum and inner ear.

Placing the phone in contact with the general area of the ear creates clear sound even in very noisy environments such as construction sites, sporting events, concerts and playgrounds. As an added benefit, removing the traditional speaker eliminates the need for a speaker cavity in the phone's housing, enabling cleaner aesthetics and enhanced waterproofing capabilities.

The technology received multiple "Best of" awards at the wireless industry's largest U.S. trade show, while editors at Popular Science magazine found the technology "worked so well - and so imperceptibly - that it eliminated the need for a conventional speaker altogether."

In 2012, Sprint added more coverage area to its Sprint Direct Connect push-to-talk service - creating three times the push-to-talk coverage of its Nextel National Network - with the addition of roaming and Sprint 1xRTT coverage areas.2 The expansion of the Sprint Direct Connect network also marks another milestone for Network Vision, Sprint's nationwide network upgrade using the newest, most advanced equipment in the industry. Sprint plans to consolidate multiple network technologies into one seamless network with the goal of increasing efficiency and enhancing network coverage, call quality and data speeds for customers.

Sprint introduced its all-new 4G LTE network in July 2012 and now offers service in 58 markets.3 For the most up-to-date details on the Sprint 4G LTE portfolio and rollout, please visit www.sprint.com/4GLTE. For detailed 4G LTE maps, providing coverage information right down to the address, please visit www.sprint.com/coverage. Customers are encouraged to check back often, as the maps will be updated when coverage in these markets is enhanced.

About Sprint Nextel
Sprint Nextel offers a comprehensive range of wireless and wireline communications services bringing the freedom of mobility to consumers, businesses and government users. Sprint Nextel served nearly 56 million customers at the end of the third quarter of 2012 and is widely recognized for developing, engineering and deploying innovative technologies, including the first wireless 4G service from a national carrier in the United States; offering industry-leading mobile data services, leading prepaid brands including Virgin Mobile USA, Boost Mobile, and Assurance Wireless; instant national and international push-to-talk capabilities; and a global Tier 1 Internet backbone. The American Customer Satisfaction Index rated Sprint No. 1 among all national carriers in customer satisfaction and most improved, across all 47 industries, during the last four years. Newsweek ranked Sprint No. 3 in both its 2011 and 2012 Green Rankings, listing it as one of the nation's greenest companies, the highest of any telecommunications company. You can learn more and visit Sprint at www.sprint.com or www.facebook.com/sprint and www.twitter.com/sprint.

About Kyocera Communications Inc.
Kyocera Communications Inc. (KCI) is the headquarters for Kyocera- and Sanyo-branded wireless products and accessories in the Americas. The company's devices are driving the convergence of telecommunications, broadband and multimedia. KCI was formed in April 2009 through the combination of Kyocera Wireless Corp. and Kyocera Sanyo Telecommunications Inc., two wholly owned subsidiaries of Kyocera International Inc. The former was created when Kyocera purchased Qualcomm Inc.'s consumer wireless phone business in 2000, while the latter was formed when Kyocera purchased the wireless phone business of Sanyo Electric Co., Ltd. in 2008. Based in San Diego, KCI leverages Japan's history of creating advanced consumer technologies around humanism and respect for the environment and blending them with a Western entrepreneurialism and style, resulting in a unique design language and a natural, user-friendly interface. For more information, please visit http://www.kyocera-wireless.com or follow the company on Facebook at www.facebook.com/kyoceramobilephones.

1More than 82.5 million U.S. handsets have been destroyed by water or moisture: January 2012 by TNS Global Research