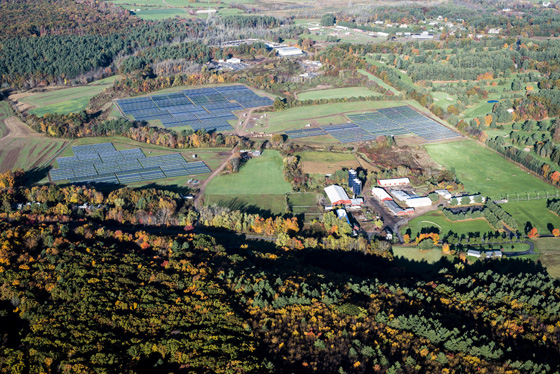 Scottsdale, AZ – January 13, 2014 – Connecticut residents who made a New Year’s resolution to reduce their environmental impact may be getting a boost without even realizing it.

On December 23, 2013, a 5-megawatt AC (7.4MW DC) installation of high-reliability Kyocera solar modules began commercial operations at Somers, Conn., providing enough annual generating capacity to offset the power needs of approximately 5,000 homes. The Somers project is the latest that Kyocera has developed and financed in the United States.

“Kyocera solar modules have earned a reputation for being some of the most efficient and reliable in the industry, built on our 38 years of experience in manufacturing photovoltaic energy solutions,” said Steve Hill, president of Kyocera Solar Inc. “Based on that history, we know Kyocera modules can be counted on to continue yielding high energy output for the 20-year agreement and beyond, serving Somers Solar Center and the people of Connecticut well.”

The system’s solar modules offer an effective way to reduce carbon dioxide emissions, which scientists regard as a primary contributor to climate change. Somers Solar Center will produce more than 10,200 megawatt-hours (MWh) of clean, renewable electricity annually, with a carbon impact equal to reducing oil consumption by 16,779 barrels ― or taking 1,503 cars off the road.

Somers Solar Center occupies 50 acres in north-central Connecticut, roughly four miles south of the Massachusetts state line. The project represents a new solar project development business strategy for Kyocera and the continuation of Dominion’s commitment to a diversified portfolio of renewable energy. Kyocera is in the process of developing and financing more solar projects like this one using its four decades of experience in providing reliable, efficient solar energy solutions.

“As a $13.6 billion global enterprise that has been profitable throughout its 54-year history, Kyocera is leveraging its financial strength to develop and finance solar projects under highly attractive terms,” Hill continued. “This new business model enables Kyocera to offer its high-quality modules and unmatched track record to customers at very competitive rates.”

Kyocera’s new status as a U.S. solar project developer follows the precedent it set in Japan, where it owns and operates a 70MW solar installation in Kagoshima, and is in the process of building 30 to 35 additional smaller-scale solar projects to provide an additional 60 to 70MW of renewable generating capacity. In November 2013, Kyocera and Madison School District in Phoenix, Ariz., inaugurated a 1.6MW solar energy project that will offset over 60 percent of the school district’s annual electricity consumption.

To learn more about Kyocera Solar Solutions for both residential and commercial projects in the U.S. and Mexico, please contact infosolar@kyocera.com or 800-223-9580.

Kyocera is one of the world’s leading producers and suppliers of solar photovoltaic modules and systems. With a 38-year history of innovation in solar technology, the company is recognized as an industry pioneer and has set repeated world records in multicrystalline silicon cell efficiency. Kyocera serves thousands of residential and industrial customers in both developed and developing regions, with more than 4 gigawatts of solar collection equipment installed since 1975.