More than 4,300 solar streetlights illuminate 73km of the superhighway 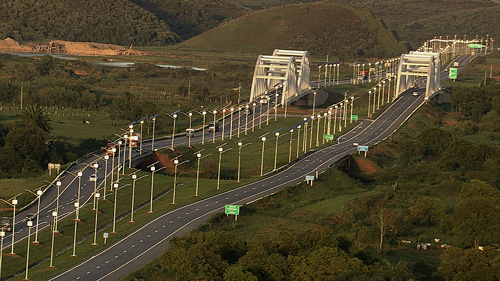 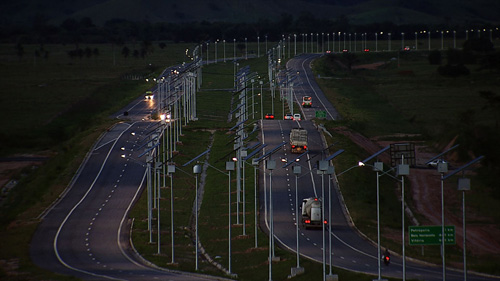 This enormous transportation initiative is helping to streamline transit logistics, improve traffic and reduce importing costs throughout the region — especially for industries such as petrochemicals, which export from the Port of Itaguaí. Improved transportation is expected to stimulate economic growth in this rural region, which was not easily accessible in the past.

The 3.2MW (DC) solar lighting project encompasses more than 4,300 solar-powered, free-standing streetlights, which are expected to produce 2.8GWh of solar energy per year. That’s equivalent to the amount of power used by approximately 1,527 average homes and equal to the carbon dioxide emissions that 1,583 acres of forest would offset. According to a World Energy Outlook Report from 2013, almost 45% of Brazil’s primary energy demand is met by renewable energy, making Brazil’s energy sector one of the least carbon-intensive in the world.

“Kyocera continues to be dedicated to solar solutions that are helpful in rural areas,” said Sergio Beninca, President of Kyocera Solar do Brasil. “This solar lighting project helps contribute by not overburdening the energy grid system that many lower-income households in the area depend on.”

“From preliminary reports, the Brazilian government expects Arco Metropolitano to provide 16,000 jobs to the region and generate US$90 million in tax revenue from sales tax generated at the municipal and federal levels, while bringing together parts of the country that were not easily accessible before,” Beninca continued. “Utilizing solar power allows the Brazilian government to deliver reliable light on the highway in areas without a traditional electricity grid. We’re honored to deliver a simple, energy-efficient solution to help advance this very important project for Brazil.”

Kyocera is a world leader in solar photovoltaic modules and systems, with a 40-year history of innovation in solar technology and multiple world records in multicrystalline silicon cell efficiency. The company serves thousands of residential and industrial customers in both developed and developing regions, with more than 6 gigawatts of solar collection equipment installed since 1975.

Kyocera Corporation (NYSE:KYO)(TOKYO:6971), the parent and global headquarters of the Kyocera Group, was founded in 1959 as a producer of fine ceramics (also known as “advanced ceramics”). By combining these engineered materials with metals and integrating them with other technologies, Kyocera has become a leading supplier of solar power generating systems, mobile phones, printers, copiers, electronic components, semiconductor packages, cutting tools and industrial ceramics. During the year ended March 31, 2015, the company’s net sales totaled 1.53 trillion yen (approx. $12.7 billion). Kyocera appears on the latest listing of the “Top 100 Global Innovators” by Thomson Reuters, and is ranked #552 on Forbes magazine’s 2015 “Global 2000” listing of the world’s largest publicly traded companies.