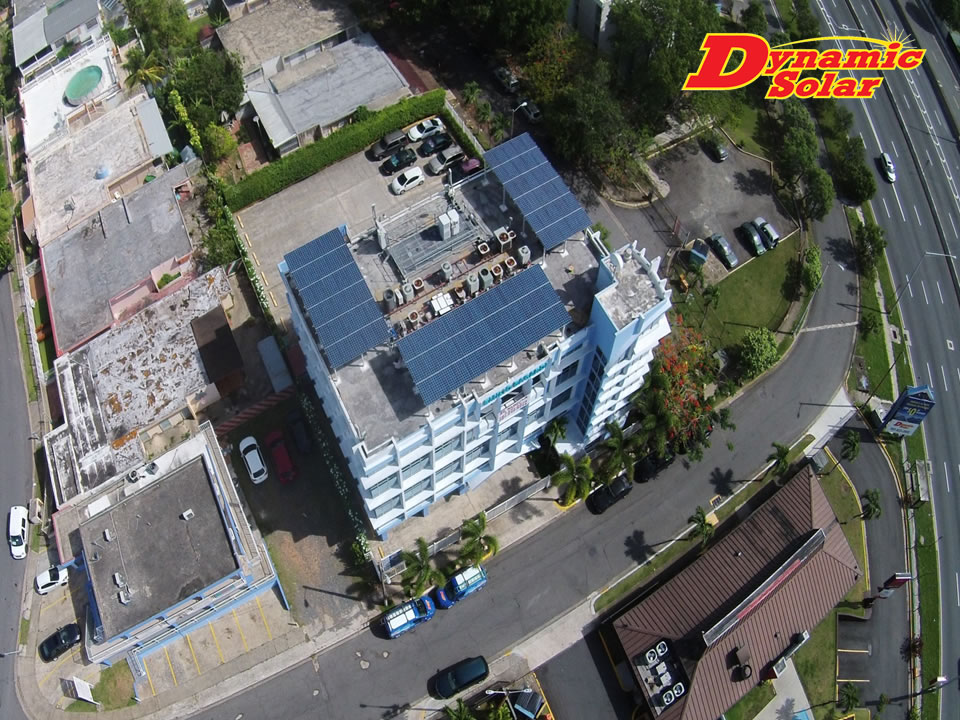 Scottsdale, AZ – October 13, 2015 – Kyocera Solar Inc. and installer Dynamic Solar Solutions today announced the installation of 24.75 kilowatts (kW) of Kyocera solar modules atop Emilio Bacardi Group headquarters in San Juan, Puerto Rico, harnessing renewable energy as a solution to rising energy prices. The system will produce 34,533 kilowatt hours (kWh) annually – offsetting 100 percent of the power needs of the building – and is expected to pay for itself within five years with the help of government incentives covering 30 percent of the cost.

Electricity prices in the Caribbean are among the highest in the world. In Puerto Rico, electricity rates are frequently double those of the mainland United States, causing local businesses to seek ways to save on their operational costs. A Kyocera solar photovoltaic (PV) system, built from Kyocera’s high-reliability solar modules developed during the company’s four decades in the solar industry, provides a consistent, economical solution to rising energy costs.

The Emilio Bacardi Group, which has been in business for more than 40 years on the island, is the owner of Caribbean Energy Distributor Corp., Dynamic Solar Solutions (DSS), and eight related corporations.

“We offer Kyocera solar panels exclusively to our customers because of their longstanding proven high quality. So, it was an easy decision when it came to providing a solar system for our parent company,” said Juan Carlos Díaz-Galarza, Vice President of Operations for Caribbean Energy Distributor Corp.

The 99 Kyocera solar modules are installed atop a steel structure, allowing the use of the roof as a covered terrace while providing ample service access. The project balanced aesthetics with stringent building codes requiring a structure able to withstand hurricane force, 145mph winds. The system recently withstood Tropical Storm Erika in late August.

To learn more about Kyocera Solar solutions for both residential and commercial projects in the U.S. and Latin America, please contact infosolar@kyocera.com or +1-800-223-9580.

About KYOCERA
Kyocera Corporation of Kyoto, Japan, recorded consolidated sales of $12.7 billion in the fiscal year ended March 31, 2015. Kyocera is a world leader in solar photovoltaic modules and systems, with a 40-year history of innovation in solar technology and multiple world records in multicrystalline silicon cell efficiency. The company serves thousands of residential and industrial customers in both developed and developing regions, with more than 6 gigawatts of solar collection equipment installed since 1975. Kyocera is the only solar module manufacturer to have earned the highest rating across all six test categories in GTM Research’s PV Module Reliability Scorecard.