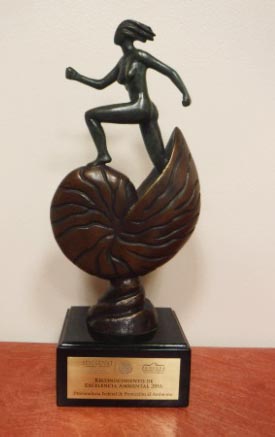 ary of Kyocera International, Inc.) in recognition for its high levels of environmental compliance, practices and concerns. Kyocera was one of only 19 companies in all of Mexico to receive this award for 2016.

Officials attending the event included Nuevo Leon State Governor Jaime Rodriguez Calderon, Federal Attorney for Environmental Protection Guillermo Haro Belchez, and Secretary of Environment and Resources Rafael Pacchiano Alaman. The award represents Mexico’s highest honor for environmental performance and demands not only compliance, but the complete integration of all environmental areas, including environmental management systems, demonstrated continuous improvements, social participation, education, emergency preparedness and emergency response. Secretary Pacchiano recognized the efforts of all of the awarded companies and mentioned many of the benefits to Mexico’s environment and economy. He also stated that Mexico’s President Enrique Peña Nieto is very optimistic knowing that more companies are engaged in these efforts.

Kyocera Mexicana President Dave Hester and General Manager Jorge Rochin were on hand to receive the award and were especially pleased and moved when the environmental minister quoted the words of Kyocera Founder Dr. Kazuo Inamori in closing his speech by specifically mentioning Kyocera and saying that all companies and citizens should practice precisely what was stated on Kyocera’s awards application: “Do what is right as a human being.”