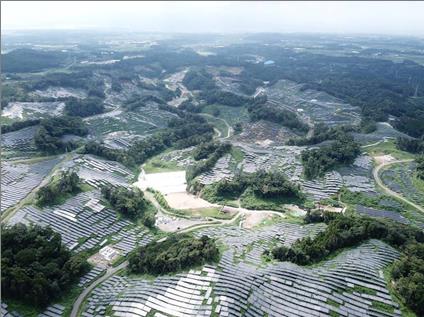 Project planning began in January 2014, as the local community expressed interest in repurposing land designated for a golf course more than 30 years ago that was subsequently abandoned. The site uses 356,928 Kyocera solar modules and is expected to generate approximately 117,000MWh — enough electricity to power roughly 39,300 typical households*2, offsetting about 62,420 tons of CO2 emissions per year.

Under the agreement, Kanoya Osaki Solar Hills LLC will manage operations of the facility. A consortium established by Kyudenko and GF is undertaking design, construction, and maintenance of the power plant, and Kyocera is supplying high-efficiency solar modules. Tokyo Century is responsible for the financing arrangement, with Tokyo Century and The Bank of Fukuoka, Ltd. jointly arranging a syndicated loan with 17 regional banks.

Kanoya Osaki Solar Hills LLC has been working on the construction of the site with the cooperation of Kagoshima Prefecture, Kanoya City, the Town of Osaki, and other members of the community. We believe that this installation will contribute greatly to the local community through the creation of jobs and increased tax revenues in both Kanoya and Osaki. In addition, considering the site’s impact on its surrounding natural environment, we aimed to build a power plant with an environmentally friendly design to minimize land development impact.

Through this project, we will continue to promote renewable energy, environmental protection and a more sustainable society.

“GF, Kyocera, Kyudenko and Tokyo Century started this project with a commitment to contribute to the community in cooperation with local governments by assisting with a long-term land redevelopment vision,” said Akihito Kubota, Executive Officer and General Manager of the Corporate Smart Energy Group at Kyocera. “Kanoya Osaki Solar Hills LLC aims to operate a power plant with an environmentally friendly design to minimize land redevelopment impact. Through this project, we will continue to promote renewable energy, environmental protection, and a more sustainable society.”

*1. Among operating solar power plants. Based on research by the four companies (as of April 1, 2020)

*2. Based on average annual use of 2,973.6kWh per household. Source: Japan Atomic Energy Organization (Graphical Flip-chart of Nuclear & Energy)

KyoceraCorporation (TOKYO:6971, https://global.kyocera.com/), the parent and global headquarters of the Kyocera Group, was founded in 1959 as a producer of fine ceramics (also known as “advanced ceramics”). By combining these engineered materials with metals and integrating them with other technologies, Kyocera has become a leading supplier of industrial and automotive components, semiconductor packages, electronic devices, smart energy systems, printers, copiers, and mobile phones. During the year ended March 31, 2020, the company’s consolidated sales revenue totaled 1.6 trillion yen (approx. US$14.7 billion). Kyocera is ranked #655 on Forbes magazine’s 2019 “Global 2000” list of the world’s largest publicly traded companies.