Costa Mesa, Calif. – October 8, 2020 -- Kyocera announced today that its new patented INNOVATIONblack ceramic knives were proven to maintain razor-like sharpness twice as long as traditional ceramic knives.* The INNOVATIONblack line is the first to use a new fusion of ceramic materials that outperform prior generations of ceramic knives and has been awarded patents in the U.S., Europe, Japan and China. This new technology took more than 12 years of dedicated research and development (R&D) to determine the proper composition and sintering of ceramic particles to create this proprietary line of kitchen cutlery.

“We wanted to discover a new technology to bring our industry forward in terms of performance for a reasonable price. There are some incredible knives for up to $25,000 that the average person could never afford, of course. Taking that idea of higher performance for the home chef, we worked with a number of materials combined with our high-precision ceramics to determine the best combination that both increased durability of the blade and doubled sharpness retention. INNOVATIONblack is the result of that extensive R&D,” said Takanori Nishihara, inventor of the INNOVATIONblack line. “We were challenged with the black ceramics material, which is typically more difficult to polish than the traditional white ceramics, but our new material created a beautiful knife with better performance and our finest craftsmanship in 36 years.” 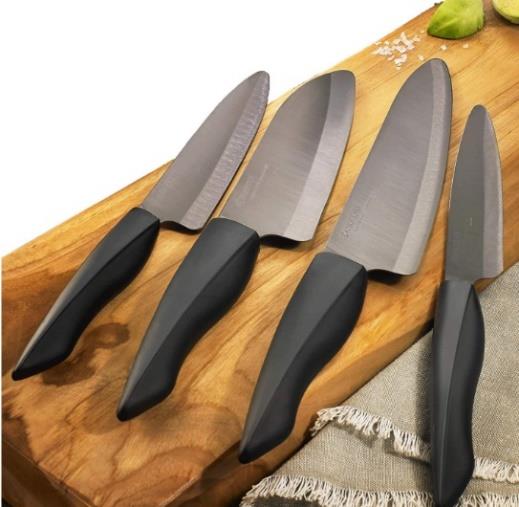 Bringing decades of advanced ceramics expertise to kitchen cutlery, KYOCERA was able to push the boundaries of existing industry technology. The engineering team was given ample time to experiment and understand the nuances of forming and sintering various materials, combined with ceramics, to create these ultra-sharp knives. The easy-to-use INNOVATIONblack line delivers exceptional craftsmanship to the market at an affordable price point for the company’s most impressive ceramic knife series to date.

INNOVATIONblack's ultra-long-lasting, non-corrosive blade will never brown food and is resistant to acidic foods, combined with an angled soft-grip handle, enables precise cutting control while reducing hand and wrist fatigue from repetitive cutting tasks. The well-balanced, lightweight knife series is fit for any professional kitchen or a home cook who's regularly handling meal preparation of fruits, vegetables, and boneless fish and meats.

An industry-standard paper cutting test called the HONDA test verifies the sharpness longevity of this
newly developed blade. It was repeatedly pressed onto a stack of paper to see how many sheets of paper are cut after ongoing use. INNOVATIONblack maintained its sharpness throughout, degrading minimally, which is an excellent result after the 128th cutting cycle, and doubling the edge retention of KYOCERA’s traditional ceramic knives. Kyocera's globally patented (US #10,118,302 B2) Z212 INNOVATIONblack series features a dark graphite grey blade and black handle. Made in Japan with exceptional quality and beauty, the series includes seven sizes ranging from approximately $39.95 - $89.95 including a Paring, Utility, Slicing, Santoku, 6-inch and 7-inch Chef's knives and a 2PC Knife Set packaged in a Kyocera embossed gift box. Bryan Katz was one of the first customers to use INNOVATIONblack: "These knives aren't sharp. They don't cut. They simply part the food. There's absolutely no kerf, no tearing, and no bruising. These blades are virtually non-existent thin. Razor-blade thin. And then sharpened even thinner. This, of course, makes them weightless too. I quickly found that I could simply push them through the peppers, but with a normal comfortable slicing motion, there simply was no pepper. We're not talking soft butter here. We're talking liquid butter. Straight-up air. I couldn't feel the pepper at all. I felt my arm moving, and then I felt a cutting board." Kyocera was one of the first companies in the world to begin manufacturing and selling kitchen knives with blades made from fine ceramics. Since 1984, Kyocera has been continually enhancing the material technology and design of its ceramic knives, developing its product range with various colors and styles and converting customers worldwide to fans of ceramic kitchen tools. Kyocera's traditional ultra-sharp zirconia ceramic blade will maintain its sharpness up to 10x longer than metal knives. Its new patented INNOVATIONblack series boasts twice the long-lasting sharpness of previous blades. Learn more about the craftsmanship behind Kyocera's Japan-made ceramic knives here.

*Based on internal Kyocera testing

About KYOCERA
Kyocera Corporation (TOKYO: 6971), the parent and global headquarters of the Kyocera Group, was founded in 1959 as a producer of fine ceramics (also known as “advanced ceramics”). By combining these engineered materials with metals and integrating them with other technologies, Kyocera has become a leading supplier of industrial and automotive components, semiconductor packages, electronic devices, smart energy systems, printers, copiers, and mobile phones. During the year ended March 31, 2020, the company’s consolidated sales revenue totaled 1.6 trillion yen (approx. US$14.7 billion). Kyocera is ranked #655 on Forbes magazine’s 2019 “Global 2000” list of the world’s largest
publicly traded companies.