Background
The central ADAS challenge lies in replicating a human driver’s ability to interpret visual data. The human eye is a miracle of bioengineering — and our brain not only combines the two different signals from our left and right eyes, but also interprets the result faster and more accurately than all but the most powerful computers. ADAS engineers strive to replicate this through digital sensing and processing. A dilemma quickly arises, however, as obtaining better data generally requires more and more sensors — until the vehicle’s microprocessors simply cannot integrate all the data in real time.

Cameras and LiDAR
Because cameras and LiDAR each offer unique benefits, they are often employed in combination. Cameras are ideal for detecting the color and shape of an object; LiDAR excels in measuring distance and creating highly accurate 3-dimensional images. However, digital imaging from two units that don’t share the same optical axis exhibits a deviation error known as parallax. A computer can theoretically integrate two data channels to correct parallax error, but the resulting time lag creates an obstacle to any application requiring highly accurate, real-time information, such as driving.

1. Camera and LiDAR: Two devices in one unit1
Kyocera’s patented Camera-LiDAR Fusion Sensor combines a camera with LiDAR to provide highly accurate images in real time. Because both devices use the same lens, the camera and LiDAR signals have identical optical axes, resulting in high-resolution 3D images with no parallax deviation.

2. Delay-free data: Ideal for automotive use
With a single unit1, the process of integrating camera and LiDAR data is greatly simplified, allowing timely and accurate object detection with no delay to improve driving safety.

While other LiDAR systems have used a motor to rotate a mirror continuously as they scan an image, mechanical assemblies introduce reliability issues amid the shock and vibration of normal driving. Kyocera has developed a solid-state solution using a micro-electromechanical system (MEMS) mirror that eliminates the conventional rotating assembly, based on advanced ceramic technology Kyocera developed as the world leader in ceramic semiconductor packaging.

■ Development status
Kyocera’s Camera-LiDAR Fusion Sensor is currently under development and targeted for release by March 2025. It is expected to be used both in vehicles and in various other fields, such as construction, robotics, industrial equipment, and security systems that can recognize people and objects.

1 Kyocera has applied for patents on intellectual property integrating camera and LiDAR technology in five regions. Patents have already been registered in Japan and the United States, including US 10838044, with patents pending in Europe, China and South Korea.

Millimeter-Wave Radar
Radar is based on the same concept as LiDAR, but uses radio waves instead of light to measure distance, speed, and angle by calculating time and frequency differences in the returning signal. One key feature of radar is that its accuracy is not easily degraded by weather or backlighting. 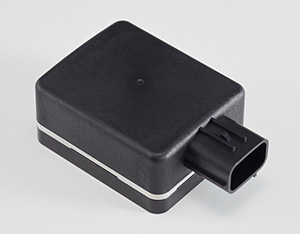 4. Reduced system cost and complexity
With Kyocera’s millimeter-wave technology, functions currently requiring multiple sensors can be integrated through high-speed switching into a single radar module. This allows the total number of radar sensors to be reduced, contributing to lower cost and simpler design. In principle, modules providing three different sensing functions could allow a system of 12 single-function sensors to be replaced with a future system of just four multifunctional modules.

■ Status of development
Kyocera is currently developing a Multifunctional Millimeter-Wave Radar Module that utilizes 60GHz radar in addition to conventional 77GHz and 79GHz radar. Since the 60GHz band can be used both indoors and in vehicles, it is expected to have a variety of applications. In addition to ADAS, this module will be able to detect children left in cars, analyze the vibration waveforms and spectra of industrial machinery, or detect the heartbeat and respiration of a sleeping patient in a medical institution or nursing facility. A timetable for availability will be announced.