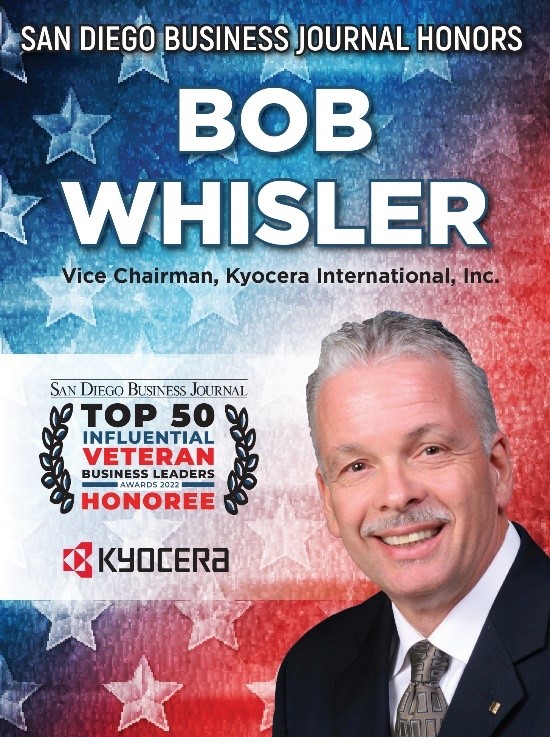 Whisler, a U.S. Navy veteran, rose from an entry-level sales position in 1981 to become president of both Kyocera America, Inc. and Kyocera Mexicana, S.A. de C.V. in 2000. Executive promotions later made him president of the U.S. parent company, Kyocera International, Inc. (in 2016), and Vice Chairman (in 2021). He has also served as Managing Executive Officer and Director of Kyocera Corporation, the group’s global headquarters in Kyoto, Japan.

Whisler’s leadership of Kyocera International, Inc. began in a period of prosperity soon shaken by trade friction, a global pandemic, supply disruptions and inflation. Fortunately, the company faced these challenges on a rock-solid foundation after a restructuring that Whisler led in his first 90 days at the helm — consolidating five wholly-owned subsidiaries into one stronger Kyocera company in North America.

Whisler believes a strong manufacturing base is essential for America’s future. Echoing the words of Kyocera’s founder, the late Dr. Kazuo Inamori, Whisler made “Protect Production” the mandate of Kyocera sales teams. They have a unique legacy to protect: Kyocera was the first Japanese technology company with manufacturing operations in State of California (1971), and among the first to build a high-tech factory in Baja, Mexico (1987), anticipating the maquiladora boom.

“Kyocera’s support of U.S. technology companies helped enable the rise of Silicon Valley, and our capabilities continue to expand,” Whisler stated. “Our world will be even more prosperous with digital technology in communications, biomedicine, smart vehicles and renewable energy.”

In addition to collaborating with the world’s leading semiconductor manufacturers, Whisler had the special good fortune of working under Kyocera founder Kazuo Inamori, a mentor in business and life. Inamori was named “Japan’s Most Effective Manager” in two separate surveys before retiring in 1997 at age 65, and was named “Japan’s Most Effective Corporate President” again at age 80 after leading the turnaround of Japan Airlines as an unpaid volunteer.